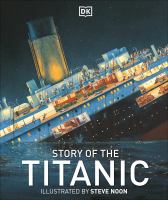 Story of the Titanic

The true story of the world's most famous ship is retold in this beautiful book with stunning visuals and a gripping narrative.

One fateful night in 1912 the so-called Ship of Dreams turned into a nightmare in the Atlantic Ocean after hitting an iceberg and sinking on its maiden voyage.

The tragedy of the Titanic is shown in dramatic original illustrations by award-winning artist Steve Noon. This luxurious liner still has the power to capture public imagination more than any other vessel in history and more than a century later. From being built and setting sail to sinking fast and saving lives, the Titanic is explored and explained in fascinating detail with intricate cutaway scenes and cross-sections.

Meet the captain, crew, and passengers from all walks of life who lost their lives or survived the sinking. Discover exactly what happened on the disastrous voyage, the reasons why Titanic sank, and what lessons were learned for the future. Watch the drama unfold as ordinary people became unsung heroes and the supposedly unsinkable ship became an underwater wreck.

Whether you're a history buff or simply seeking help for a school project, this is the ultimate tribute to Titanic.

My nephew loved the cutout views inside of the Titanic. Hey it kept a 3 year old entertained!

"Explores the history of the steamship Titanic, from Thomas Andrews' plans for "the safest ship on the ocean" to the lingering questions concerning its disastrous maiden voyage in 1912." April 2013 Kids' Books newsletter http://www.nextreads.com/Display2.aspx?SID=5acc8fc1-4e91-4ebe-906d-f8fc5e82a8e0&N=627240

blue_jellyfish_678 thinks this title is suitable for 6 years and over

It was the length of at least twenty-two buses placed end to end. With a capacity of 73,923 tons, it was the heaviest ship afloat at the time. It was on its first ocean voyage, its construction having just been completed at Harland and Wolff, a Belfast shipyard (where, due to its immense size, special ramps had to be built to launch it). More than 11,300 people had worked on the construction of the immense ship. Because of its system of fifteen bulkheads dividing the ship into sixteen watertight compartments, and its double-bottomed hull, it was deemed by Harland and Wolff to be “virtually unsinkable”. With a swimming pool, gymnasium, libraries, restaurants and opulent fixtures, it was celebrated as the most luxurious ocean liner of its time. The Titanic was all of this, and more.
Yet on the night of April 15, 1912, the Titanic sank after hitting an iceberg on the Atlantic Ocean.
1514 people perished in the horrific disaster. Only 710 people survived.
The Story of the Titanic describes the magnificent ship and invites young readers onboard, with large, colourful pictures and diagrams of the ship both inside and outside, and items and people to search for on the ship. A glossary and index are included in this visually pleasing book, which concludes with the liner’s sinking and the searches made later for the sunken ship (found in 1985 in an expedition led by Dr. Robert Ballard).

There are no notices for this title yet.

There are no quotes for this title yet.