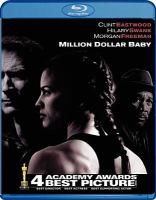 Frankie Dunn has trained and managed some incredible fighters during a lifetime spent in the ring. Since his painful estrangement from his daughter, Frankie has been unwilling to let himself get close to anyone. His only friend, Scrap, is an ex-boxer who looks after Frankie's gym. He knows that Frankie has been seeking forgiveness for the past 25 years. Then Maggie Fitzgerald walks into his gym. Maggie is a waitress with a dysfunctional family. She convinces Frankie to coach her and be her manager.
Edition: Blu-ray version.
ISBN: 9781419842375
1419842374

A very good movie of rising above a horrible early life by kindness, guidance, wisdom & determination.

I saw this movie last year on Netflix and loved it; better than "Rocky" or "Karate Kid". I enjoy well done narration and no one does it better than Morgan Freeman; although it didn't really seem necessary in this movie except to explain the side story of Frankie's estrangement from his daughter.
I wonder if this movie helped to bring about the legalization of assisted suicide?
What I really hated about this movie was the anti-welfare propaganda; the makers of this movie are completely clueless about people that need to seek public assistance.

Client Eastwood in my opinion got better with age and experience. I believe this is one of Client's best movies. A must see if you are into the underdog and tragedy type movies. The end is actually so sad and powerful and could actually happen. If you liked Client Eastwood in Unforgiving or Torino you may actually enjoy this movie if you have not already seen it.

After seeing this horrible movie, I am convinced that the Academy voters have a short term memory when it comes to good films. I cannot believe this won Best Picture. I can't give any details of the film because, frankly, I can't remember any. The only scene that stands out is a scene in which Hillary Swank's character is hospitalized. An emergency occurs, and what follows was completely sickening to me. Way too graphic. Even Rocky wasn't that bad. I would give this movie a Razzi instead of an Oscar in a heartbeat! They should thank their lucky stars the movie was released at Christmas.

Great performances all around. Absolutely worth watching.

There is both much to admire, and to despise, within this film. I believe the positives far outweigh the negatives, yet the negatives are so odious, so blatant, that they amount to a major defacement--all the more so because they could have so easily been corrected--marring what otherwise might have been a masterpiece of film making. As a drama about two lonely people who find each other and fall in love (though not in a romantic sense), this film is in a class few others share. As a drama about the sport of boxing, it veers wildly between insightful and ridiculous, and the film as a whole too often embraces caricature and melodrama, crippling our suspension of disbelief and leaving it floundering.

The film revolves about Maggie Fitzgerald (Hilary Swank)--a 30 year old woman who attempts to escape a difficult upbringing in a single-minded pursuit of a boxing career--and Frankie Dunn (Clint Eastwood), a down-on-his-luck manager/trainer and owner of a rundown boxing gym. She basically takes up residence in his gym, working out and trying to persuade him to take her under his wing. He wants no part of managing a "girl"--especially one virtually over the hill--and puts her off with one caustic rebuff after another. She persists, and over time, stubbornly refusing to take no for an answer, finally persuades him to train her. Before long, reluctantly, a bond begins to grow between the crusty old trainer, permanently estranged from his only daughter, and this fiercely determined woman whose father, the only person who ever loved her, died long ago. It is this growing relationship that is the heart of the film, and it is magnificently played out between these fine actors. Swank in particular is mesmerizing, every gesture, every expression is convincing. We come to care so deeply for these characters [Spoiler Alert] that the ultimate tragedy that befalls them is almost unbearable to watch.

Or at least, it would be if you can ignore the intruding absurdities. The principle problem concerns the fights involving a boxer called "The Blue Bear"--a figure so ludicrous her appearance in a comic book would be jarringly idiotic. We see her perform acts of deranged mayhem in the ring that make the biting off of an ear seem pacifist. A Nazi Storm Trooper would find her embarrassing. Anyone displaying these traits in real life would be barred from prize-fighting years before reaching a title fight. To suggest that such a one could become champion is light years beyond far-fetched.

There are other drawbacks which are far from incidental, but in spite of them, found myself spellbound by Maggie and Frankie's relationship. There are other nice things about the film, not least of which is a crowd-pleasing "interchange" between Morgan Freeman and a bully/would-be fighter. And of course, there is Freeman's narration, always marvelous. Eastwood's direction which, in spite of contributing to the lapses noted above, does a fabulous job of getting the most from his cast and providing a wonderfully paced movie--but it is the strength of the central relationship which buoys the film, keeping it afloat in the midst of its sea of weakness. I cannot help but mourn the loss of what could have been. A more realistic villain, a fine-tuning of the script, and this might have been both the greatest boxing movie of all time, and one of the great love stories. I'd like to shake Haggis (the writer) and Eastwood for failing to fully capitalize on their opportunity.

A fantastic movie. With Clint Eastwood, Hillary Swank and Morgan Freeman what could be better! Amazing actors. an absolute 10/10. The story touched my heart, a story of determination, perseverance, friendship and love.

One of the best movies by Clint East and Hillary Swank!

Not a bad movie considering what all it is about. Moving in a lot of ways, fun in the earlier stages, disturbing later. I probably wouldn't watch it again if I were making the decision with a better knowledge of what was coming.

Frankie Dunn: It wasn't fault. I was wrong to say that.

Eddie Scrap-Iron Dupris: You damn right. I found you a fighter. You made her the best fighter she could be.

Frankie Dunn: I killed her.

Eddie Scrap-Iron Dupris: Don't say that. Maggie walked through that door with nothing buts guts. No chance in the world of being what she needed to be. It was because of you that she was fighting the championship of the world. You did that. People die everyday, Frankie - mopping floors, washing dishes and you know what their last thought is? I never got my shot. Because of you Maggie got her shot. If she dies today you know what her last thought would be? I think I did all right.

There are no age suitabilities for this title yet.

There are no summaries for this title yet.