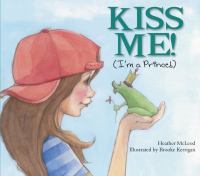 "If you kiss me, I'll turn into a prince!" says the frog. But Ella thinks that a talking frog is much more interesting and fun than living like a princess in a castle. And when she introduces her life to the royal prince, he tends to agree. Their friendship grows and when he does return to his world at the castle he makes a deal with his parents to allow him to continue his royal duties while also taking time out to play with his best friend...And, of course, only the kiss of a true friend can break the curse and return him to his true princely form.
Publisher: Markham, Ont. : Fitzhenry & Whiteside, 2010.
ISBN: 9781554551613
Characteristics: [32] p. :,col. ill. ;,24 cm.
Additional Contributors: Kerrigan, Brooke

A very rational look at the implications of changing the frog back to a prince, and what it means to become a princess. A soft style and bright colours emphasize the child's wish to remain in her child's world.

SK-Grade 1's thought, Kiss Me, I'm A Prince, was an excellent book! They decided most of them would also kiss the frog at the end of the story so that they could have a friend to play baseball with.

Ms. Harbin's class liked the part when the Ella kisses the frog because then they get to play. But, some people didn't like the kiss because it was gross!!

Ms. Cimaglia's class didn't really like this book because they think the kiss is gross, and maybe Ella could have gotten germs from the frog. It's gross to kiss a frog because frogs eat flies. It was funny when the frog kept puckering his lips looking for a kiss.

A great story with beautiful illustrations.

Would you kiss a frog - even if it was a talking frog? No? Well, Ella didn’t feel like kissing one either. No matter that this frog had once been a prince who would be a king someday, and could offer her the life of a pampered princess – she wasn’t tempted, not even for a second!
When the prince described his former life, Ella was even less tempted. It turned out that the prince used to spend most of his day at the castle studying etiquette, warfare, international finances and languages. Ella didn’t think that sounded very interesting. Neither was she at all interested in wearing fancy dresses that had to be kept clean and unwrinkled everyday.
Ella and the frog became good friends, and soon, the he had to agree that Ella’s life (swimming and splashing about in the water, getting dirty in the sand and mud, exploring the world around her, playing hopscotch and other games) was much more fun than life at the castle.
Just as the frog began to forget about being a prince, however, a royal courtier arrived to take him home in a fancy horse-drawn carriage (no matter that he was still a frog, having been unsuccessful in finding anyone to kiss him).
But after a couple of weeks, he returned in the carriage, again asking Ella for a kiss. And this time, Ella agreed – to give a kiss of friendship - which un-enchanted the frog … and led to a surprising conclusion.
This untraditional retelling of The Frog Prince will delight children and keep them guessing until the end, and Brooke Kerrigan’s fun, expressive illustrations truly enhance this very entertaining story.
Kiss Me! (I’m a Prince!) is Thunder Bay resident (and former CBC radio host) Heather McLeod’s first book.

There are no notices for this title yet.

There are no quotes for this title yet.